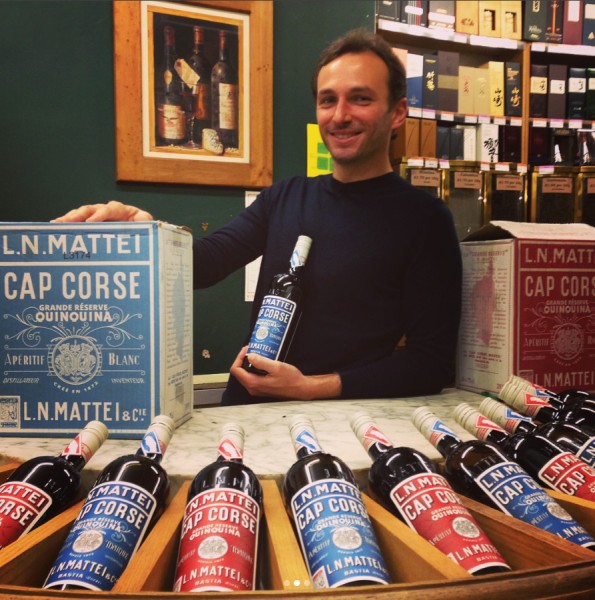 Adrien Angeli is the maker of L.N. Mattei Cap Corse which is a bitter aromatized aperitif wine with an elevated alcohol volume. There are two versions of Cap Corse: the Grande Reserves and the Le Seul Vrai Aperitifs. Both versions contain one white- and one redwine. Cap Mattei goes back to 1872 where it was invented by Louis Napoleon Mattei. He added china bark in an effort to create bitter, unique wines. Since then Cap Mattei is the symbol of corsician aperitif-culture. Finally those noble aperitifs are available in Germany, too. We had the chance to talk to the man who is responsible for their revival:

Perola: The base for your Cap Corse is Quinquina. Not everybody knows that. Could you explain what exactly Quinquina is?

Adrien: The term "quiquina" designates a tree that grows in Central America and from which quinine is extracted. Historically, wines aromatised with quinquina appeared in Europe later than other aromatised wines (like vermouths), simple because botanicals used in vermouths grow locally, and are therefore easy to source, whereas quinquina could not be used until it started being imported in Europe. Originally, wines fortified with quinquina were used to provide quinine to soldiers, to calm fever or treat malaria.

Perola: You are using Mistelle for the Cap Corse Rouge and Blanc. Why are you useing this wine and how is it involved in your product?

Adrien: Mistelle comes from the italian "misto", which means "mixed". Here it designates an unfermented juice of Corsican grapes, namely Muscat and Vermentinu, blended with alcohol before fermentation. This really is part of Cap Corse Mattei's DNA: right from the beginning it was imagined as a way to promote Corsica via its terroir, and since Corsica has always had a tradition for wine, dating from the Roman epoch, it was natural to do so using grape juice. Mistelle is the most important ingredient of the recipe: we need approximately 1kg of grapes to make 1 bottle of Cap Corse Mattei! But it is not the only ingredient, we use a total of 30 different botanicals to obtain the profiles of the different expressions available today.

Perola: Where do you find the used Botanicals (especially the china bark) for both Cap Corse Grande Reserves? Are they grown locally?

Adrien: Some botanicals, like quinquina, or cocoa, are imported, because they grow in exotic places like Central America or Central Africa. They arrive dried, in chunks or crunched. Others, like the organic "cédrat" (a.k.a. citron), are grown locally. More importantly, to reinforce the identity of Cap Corse Mattei, we use a Corsican variety of cédrat, unique and different from its asian ancestor. Fresh citrus fruits are manually peeled, in order to get very thin zests.It is important to mention that we do not use aromas, we do our own macerations of plants/fruits/spices to extract flavours that will be used for the aromatisation.

Perola: Do all steps of the production take place in the destillery on corsica?

Adrien: Yes, we do everything in house.

Perola: Cap Corse Rouge sounds similar to a vermouth…what ist the difference to the bitter spirit beside the bitter ingredient being another one?

Adrien: In Cap Corse Mattei bitterness is mostly provided by quinquina, as opposed to wormwood, the main botanical ingredient used in vermouth. They hit the palate in very different manners: quinquina hits the back of the palate, and is very dry, whereas wormwood hits the front palate, and is sweeter. Overall that provides a completely different experience: Cap Corse Mattei leaves a dry bitterness coming from the back of the tongue whereas vermouth has a sweeter bitterness coming frontaly.

Adrien: Of course it can! More generally Cap Corse Mattei Grande Réserve Blanc can replace Kina Lillet in all the cocktails that used to call for this product. It is to my knowledge the only Blanc on the market today with an intensely enough quinquina profile to replace Kina Lillet.

Perola: You created two versions of the Cap Corse: the Grande Reserves and the Le Seul Vrai versions. What ist the difference between the both editions and why are there two versions at all?

Adrien: Historically Cap Corse Mattei used to be intensely bitter: at the time of its invention in 1872, it was called "Amaro" (the italian for bitter), before taking the name of its birthplace, the cape at the extreme North of the island, in 1894. At this time, it was certainly used in cocktails, like most aromatised wines. But between 1872 and the 60's, the profile gradually became less bitter, to adapt to a different consumption, neat, as an aperitif. It was important to us that both types of profiles could co-exist today: a bitter one, with an intense quinquina profile, which finds applications in cocktails, and a less bitter one, to be drank mostly as an aperitif.

Perola: In 1930 Cap Mattei was tremendously popular. More than one million bottles had been exported. After that, the Cap Corse had been faded in obscurity. Why do you think should Cap Mattei be represented in the bars of the world again?

Adrien: The very first export sales happened when Corsicans moved to French colonnies and brought a slice of the island with them: Cap Corse Mattei. The original intention was to show what Corsica was via it's most famous drink, but rapidely that helped developping commercial links with those countries, which ceased when colonnies disappeared. Our intention today is again to make people discover what Corsica is, using Cap Corse Mattei as an ambassador. And because it is so distinctively unique from other aperitif wines it should be in every bar of the world!

Perola: Which of your products do you like the most? And why?

Adrien: Personnaly I have a crunch for Cap Corse Mattei Grande Réserve Blanc, because it is intense but well balanced, not overpowered, and because it is uncomparable: I have never drunk any other aperitif wine with a similar profile. I guess the reason is that its components are so Corsican by nature, especially the Muscat & Vermentinu grapes, the cédrat, that it is impossible to imitate, even though 56 imiations of Cap Corse have been done.

Perola: Would you tell us the recipe of your favorite Cap Corse Drink? Maybe with the recipe for our readers?

Adrien: I like mixing Cap Corse Mattei Blanc with a splash of soda water (50:50 mix) and an orange twist: refreshing, easy to sip and to do, the perfect companion for every dinner party!

Perola: All your products haven’t matured. In a interview with Joerg Meyer you‘ve said that there will be some aging in the future…can you tell us more about this plan? Are you developing new products or will there be new versions of the Cap Corse?

Adrien: Aging is a very complicated process, more especially when you want to make sure the profile remains consistent over time. We are considering aging the mistelle in 5000L casks, but that would be for a specific edition of Cap Corse Mattei, not for the entire stock of existing expressions. There is no specific deadline for this project, if we do it we want to take time to do it well, so for the moment, there are no plans for a new product in the near future, which will leave more time to enjoy the actually available expressions of Cap Corse Mattei!