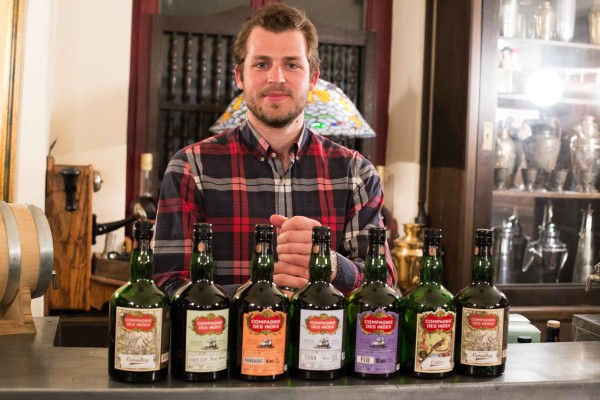 Florent Beuchet is the man behind Compagnie des Indes. He found his way into the spirits business over his familiy, which has a history in wine. His father also owns an absinthe distillery. He even did his master in Wine and Spirit Trading and worked for a year and a half at Banks Rum in New York. Right after that he founded Compagnie des Indes in the spirit of the adventurers and traders of the West India Companys in the 17th century. Besides some rum blends for bars and beginners, the main focus of the brand are lots of very special single cask and cask strength rums. We are proud to distribute Compagnie des Indes Rums in germany since 2015 – and today we had the chance to ask Florent some questions about his work in the world of rums.

Perola: What feels better: To find a good barrel of one of the hype-distilleries like Hampden or Caroni for a reasonable price or to find an outstanding rum of a distillery or country nobody had on the radar before (like you did for example with New Yarmouth)?

Florent: Good question, but I think the best feeling is finding a good barrel in general *laughs*. What I try to do in the last years when I stock my rums is to always attract the attention of the consumer with either new origins or distilleries that are not really known. That’s kind of the idea: to showcase a distillery or an origin that nobody has tried before. Yeah, like maybe I did with Indonesia or the New Yarmouth. It’s kind of rewarding, when the consumers in the end like the rum even more than I did.

Perola: For some of the mentioned distilleries like Hampden, Foursquare or Caroni the prices per bottle (and per barrel of course) rose astronomically in the last years. How do you think this trend will develop in the next time?

Florent: Well, I gave an interview for a french magazine a year and a half ago. The idea was to raise the consumers` attention for the fact, that overall the prices of rum are increasing and the fact, that it’s a good time to buy rum nowadays. I think, unfortunately I unsettled people with this. I think the prices of rum will keep on going. Of course those from pretty iconic distilleries, but not only. It’s a mathematical calculation: The number of rum distilleries in the world is smaller than the number of whisky distilleries. And also, those distilleries are mostly producing white rum for cocktails or white rhum agricole for the french market. Only a few do aged rum. So now, that the market for aged rum or let’s say more than ten year old rum, is rising, we are getting to a time where stocks are going down and the market is going up. The prices are going up for sure. Also because the distilleries don’t want to sell their barrels anymore. They want to maximize their profits on their barrels. So they directly sell the rum in the bottles on the shelf. Unfortunately I think the prices are going to keep on raising, just because it’s a mathematical calculation that there’s a bigger demand then offer. Actually I think, honestly the prices of aged rum should be higher than the prices of aged whisky, because there are much less distilleries and a much smaller stock of rum in the world than stock of whisky.

Perola: Since you mentioned White Rum: Lately White Rum seems to loose a little bit of it’s just-for-mixing-reputation, Habitation Velier for example is working with luxurious unaged rums. Are Highclass-White Rums something that we might see from CDI in the near future?

Florent: That’s a possibility. It’s tricky to ask people to pay a high price for white rum compared to aged rum. However when you look at the process of making more spiritful white rum, it’s higher. Why? Because the plantation and the type of distillation which are much more encrafted in the way of doing deep white rum. They need more flavor so are probably more expensive. Regularly those rums are bottled at a higher strength, to make them more interesting and more palatable. On my side I‘m not sure yet, if I want to concentrate a lot on white rum, it’s still a smaller market. Maybe I release one or two in the future, if I find a pretty cool distillery. But apart from this I think I stick to aged rum.

Perola: You also mentioned Rhum Agricole as something that has even fewer distilleries than molasses rums.  Apart from some exceptions Compagnie des Indes also does mostly molasses-Rums. Are good Agricoles just really that much harder to get or do you also focus more on molasses?

Florent: Yeah, Rhum Agricole has smaller entities and less distilleries than there are for latin america or the carribean. They are what we could call a style of farm distillery. They use the cane juice, that is deep in the cane and not easy to transport, it’s not like molasses, that you can import from all over the world.  For the cane juice you have to get the cane and crush it right after harvest. If you have to transport it for five days, you loose half of the juice, so that’s not interesting. The problem with those distilleries is the volume: They produce less and of course they have less barrels of rum in stock. So once again it’s a market thing: they are more likely to keep their barrels instead of selling them or to sell only white rum. Even though I might have been buying some recently, it might take some time before we can be bottling this new Rhum Agricole.

Perola: You once said, you learned how to identify a good rum, even when you personally don’t like it. Are there also moments where you find a … let’s say „educational“ rum, where you know, that only few people will really like it, but everyone wants to have tasted it?

Florent: Well, it’s a tricky balance to reach. Of course I don’t always bottle barrels I love. But I know how to identify and bottle barrels which I think are of good quality, even if they are not my favorite. But they might be the favorite of some other people. Some people like their rums dryer, spicier. Some people prefer rums which are more round, more vanilly. So, that’s why I try, when I make a release, once or twice a year, to always bottle different styles of rums, so that I can reach a wider range of customers. Yeah, that’s kind of the thing. Some of the barrels that I might find great, will not be the favorite for everybody. Especially when we look at the people wo are starting with very sugary rums, going from there directly to jamaican rums might be difficult. So, most of the time I try to bottle the range of rum which is the widest in terrain or flavor.

Perola: When doing blends like Latino or Caraibes you focus on the mentioned apprentices of rum, looking for pleasing yet complex products. When doing advanced and special blends like the Jamaica Navy Strength or the Tricorne, how much do you consider mixability when doing them?

Florent: Well, for Tricorne the idea was really to create a white rum which would help the structure of the cocktail by having a base product which is powerful. By that it will definitely make a more powerful cocktail and that will make it easier to balance. Tricorne was created with this intention. However, for the other ones it was mostly about the flavors and the palate when I created them. The dye and the sugar was really just to get the palate of the consumers which are used to those very sugary rums. That was mostly in order to educate them to drink rum with less sugar in order to move on to the rum with no sugar at all.

Perola: Will there be in the near or far future any other blends that are focused more on mixability?

Florent: So far I’m working on a new blend, but it’s mostly concentrating on consuming the product at home, between friends. It comes with a named higher aged statement. Apart from this, regarding mixability I’m keeping the same blends but am releasing a different style: Bigger bottles, so that for the bartenders it’s more cost effective to use the Tricorne and the Jamaica Navy Strength.

Perola: Sometimes, but only very few times you do finishes – like the winebarrel-versions of Latino and Caraibes. How can we imagine such a project starts? Do you know what you want to do with a rum and look for the right barrels or do you just wait until cool casks pop up und then decide which rum fits in?

Perola: When doing a blend, you can restart or adjust the recipe, if you aren’t happy with the results. With a cask finish you can’t. Are there any experiments in a corner of shame at your storehouse that turned out not good enough to get sold?

Florent: For the cask finish … well, it happened once. But so far, what I did was to keep the barrel in stock. I took the rum out of the barrel and might use it later. I sell rum not only for my brand but also supply rums in bulk to people and I also make special selections of blends for private consumers. I will keep this rum for doing a blend to sell to another customer or I’m gonna use it in another finish. I’m not gonna let go of the rum, I will just keep it in stock and wait for an opportunity with a special cask that needs to be filled. Basically I will work on the rum further more.

Perola: Speaking of experiments and cask finishes: The Oktoberum is something we have to explain at fairs very often. And when people taste it, they sometimes have problems with the aroma of yeast or are just amazed that it is no joke at all. It anyhow has a small group of very loving fans. How is this very german looking rum received in other markets?

Florent: I think the name and the label help to understand the concept of it. The flavor is most likely so different and distinctive. Either people like it or they don’t. But it’s a good way to attract some new consumers to the rum world. Because nobody has ever seen a rum aged in beer barrels. It’s almost a hybrid between a rum and a whisky. So far it’s been received very well in other markets also. In france for example I sold this to a chain which mostly sales beer. A rum aged in beer casks seemed very interesting to them.

Perola: We know you wont pick your favorite rum nation, so: If you were forced to only drink rum out of one country for the rest of your life – which would you choose?

Perola: Jamaica is a very popular rum country. In your personal opinion, what’s the most underrated rum country?

Perola: We know from another interview, that your favorite CDI-Rum ist the Jamaica 5 Year Navy Strength. But what were your favorite single cask or cask strength rums out of your portfolio?

Florent: Once I did a Jamaica Hampden 16 years old aged in french oak that was one of my favorites. I really liked the New Yarmouth. I think the Trinidad 16 years old Cask Strength was amazing.

Perola: Last question: What was the best drink you ever had with one of your products?

Florent: I think it was a drink made with Jamaica Navy Strength and Pineapple Syrup, it was made in Göteborg in Sweden. It was kind of a pineapple Soda with rum and bitter. I forgot the name, but it was delicious.